American Eagle Outfitters, Inc. (AEO, Financial) is a leading global clothing retailer based in the United States. The company offers a range of apparel, accessories, lifestyle and personal care products for men and women under its American Eagle and Aerie brands. It operates retail locations as well as online stores, and its brick-and-mortar stores are spread across the United States, Canada, Mexico and Hong Kong. American Eagle also has a presence in more than 200 locations in Europe, Asia, Latin America and the Middle East through third-party operators.

The apparel chain reported third-quarter earnings on Nov. 23, beating both the revenue and earnings estimates of Wall Street analysts.

American Eagle reported earnings of 76 cents per share compared to analyst estimates of 61 cents per share. The strong financial performance was fueled by increased consumer spending on discretionary products amid fading concerns regarding an economic recession.

American Eagle is coping with supply chain issues and shipping delays much better than some of its peers because of prudent strategic moves. To deal with supply chain disruptions, the company has been ramping up its shipping business by acquiring AirTerra, Inc. in August, and it announced the acquisition of Quiet Logistics for $350 million earlier this month. However, as demand is expected to be very high this holiday season, American Eagle expects an additional $70 million to $80 million in freight costs in the fourth quarter.

American Eagle reported total revenue of $1.27 billion for the third quarter, up 24% year-over-year, with the American Eagle label generating $941 million in sales, up 21%, and the Aerie brand generating $315 million in sales, up 28%. Aerie’s rapid expansion is aided by the debut of its new activewear brand, OFFLINE. After a year of being stuck at home, people are splurging on retail merchandise as schools, offices and public spaces reopen.

American Eagle’s digital business has also grown at a stellar rate, and the trailing 12-month digital revenue of $1.8 billion suggests the company has been very successful in attracting customers to its digital platforms.

The company has an unwavering focus on maintaining its brand value, which is a promising sign for long-term-oriented investors. American Eagle released the AerieREAL voices in August, which were featured on TikTok, Connected TV and Snapchat. Customers were able to share what makes them unique, and the company expects to feature those responses in future campaigns. Further, American Eagle added over 1.75 million and 2.25 million new customers in the last 12 and 24 months, respectively. This strong growth in the new customer base is a testament to the success of American Eagle’s branding efforts.

In the third quarter, the company successfully navigated supply chain problems with minimal disruption. However, global supply chain challenges are projected to continue in the fourth quarter as well, resulting in longer delivery times and higher transportation costs. At the end of the third quarter, inventory at cost increased by 32% to $740 million. To deal with the given logistic issues, the company has taken strategic steps to make sure the products would be readily available for customers, which is key to scoring big during the holiday season.

Retail sales are trending in the right direction

Retail sales, a measure of how much consumers spend on a variety of goods across categories, increased in September, despite rapidly rising prices, supply constraints and the Delta variant outbreak. According to the Commerce Department, sales climbed 0.8% in September following a 0.9% gain in August. Spending increased across the board, with clothes retailers seeing a 1.1% increase, sporting goods, hobbies, musical instruments and bookstores seeing a 3.7% increase and general merchandise businesses seeing a 2% increase in spending. In October, retail sales grew by another 1.7%, which confirms that the United States is heading into the holiday season on strong footing. This favorable trend in spending patterns is likely to help American Eagle report strong growth for the fourth quarter. 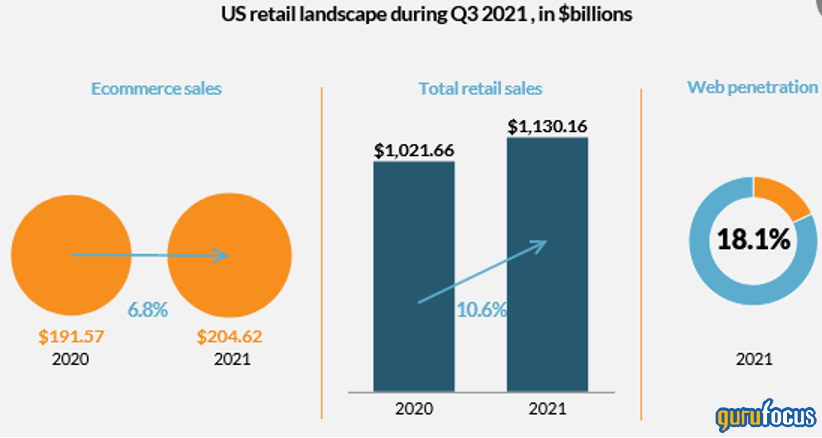 American Eagle had a strong third quarter, which does not come as a surprise considering the measures taken by the company to mitigate supply chain issues while focusing on improving its brand recognition among new customers. With its continued investment in expansion and strong presence in the retail market, I believe American Eagle Outfitters appears to be well-positioned to deliver excellent shareholder returns in the long run.