Eli Lilly and Co. (LLY, Financial) shareholders bore the brunt of the news that the Indianapolis-based pharma giant is drastically cutting the price of its diabetes drugs to maintain its market position in China. The announcement sent shares reeling, closing Monday at $254.81, down $5.56.

FiercePharma reported that Eli Lilly sliced prices of its premixed insulin drugs by 75%, the most of any of the providers, enabling the company to maintain its existing market share.

Beginning in 2022, Eli Lilly, Novo and Sanofi will surrender their leading positions in the Chinese market because their price cuts weren’t enough to undercut domestic companies. Novo, the largest insulin provider in the country with about half the market volume, projects it will lose about 3% in global sales growth next year as a result of its price reductions in China.

China has about 120 million diabetes patients. Other types of drugs are available to treat the disease, but insulin is the most used diabetes medication in the country. Together, Eli Lilly, Novo and Sanofi had a combined market share of 70% before China’s latest action.

The value-based purchasing program has been around since 2018. It assigns a large amount of business from China’s public hospitals to drugmakers who offer substantial discounts. Losing a place in the program means a company has to fight for the leftovers in the public system and the much tinier private market. 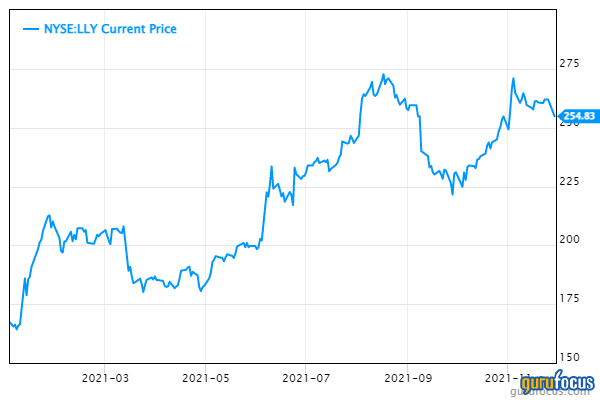 Although the policy doesn’t specifically target Western pharmas, value-based purchasing negotiations have in the past caused profound harm to the established drug businesses at Bayer AG (BAYN), Pfizer Inc. (PFE, Financial) and AstraZeneca (AZN, Financial). Pharma companies can expect more treatments to be affected by the program, including antibody drugs.

Insider Monkey recently rated Eli Lilly one of the top diabetes stocks to buy, pointing to the company’s recent clinical results for its type 2 diabetes medication Tirzepatide, which could reach $10 billion in sales, according to analysts. The company plans to submit the drug to the Food and Drug Administration and other regulatory agencies outside the U.S. by the end of the year.

Another potential $10 billion seller is the company’s Alzheimer’s treatment Donanemab, for which it has started the process to obtain regulatory approval.

Despite the latest setback to its shares, Eli Lilly’s stock is up more than 50% year to date, far outpacing the Dow Jones Industrial Average and S&P 500. It is rated a buy or strong buy by 14 of the 22 analysts offering opinions, according to Yahoo Finance.